A Fairytale For Everyone

The Story of Esther

See a documentary about Esther

Esther enters her nice appartment. She's a single, busy with her work. She comes home from her work, talking with her girlfriend on the phone ( between her cheek and neck ). With a bag and laptop in her hands. She turns on the TV ( very large screen ) and the video clip of "Queen of the Party" is playing. She sits down, start eating a sandwich and starts zapping.

-Zap1: is about 2 soldiers killed because they drove on a mine

-Zap2: is about a revolt for more freedom

-Zap 3: is about a shooter who empties his gun at school

The dance scene is also preformed live on a set next to "the appartment" with a real "Queen of the Party". After the song the scene stops.

QUEEN OF THE PARTY 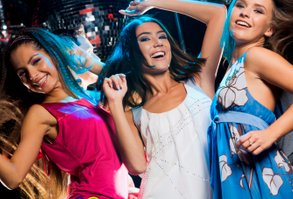 She's coming out of work , hard day is done

Nobody to welcome her , she's alone

She starts to make dinner on her own

Doing the dishes then watch TV

Zapping all channels , nothing to see

Only lots of people , trying to be free

But in her dreams , she's so much prettier

In her dreams , she will be queen of the

Reading the paper , while drinking wine

Two soldiers were killed , driving on a mine

and tomorrows weather , will be fine

Lying in her bed and reading a book

Her lover left her , never understood 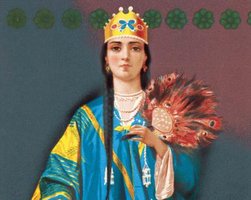 The book of Esther is one of only two books in the entire Bible named for women. The other is the book of Ruth. This is the story of a beautiful young Jewess who risked her life to serve God and to save her people.

Esther lived in ancient Persia about 100 years after the Babylonian captivity. When her parents died, the orphaned child was adopted and raised by her older cousin Mordecai.

One day the king of the Persian Empire, Xerxes I, threw a lavish party. On the final day of the festivities, he called for his queen, Vashti, eager to flaunt her beauty to his guests. But the queen refused to appear before Xerxes. Filled with anger, he deposed Queen Vashti, forever removing her from his presence.

To find his new queen, Xerxes hosted a royal beauty pageant and Esther was chosen for the throne. Her cousin Mordecai became a minor official in the Persian government of Susa.

Soon after, Mordecai uncovered a plot to assassinate the king. He told Esther about the conspiracy, and she reported it to Xerxes, giving credit to Mordecai. The plot was thwarted and Mordecai's act of kindness was preserved in the chronicles of the king.

At this same time, the king's highest official was a wicked man named Haman. He hated the Jews and he especially hated Mordecai, who had refused to bow down to him.

So, Haman devised a scheme to have every Jew in Persia killed. The king bought into the plot and agreed to annihilate the Jewish people on a specific day. Meanwhile, Mordecai learned of the plan and shared it with Esther, challenging her with these famous words:

"Do not think that because you are in the king's house you alone of all the Jews will escape. For if you remain silent at this time, relief and deliverance for the Jews will arise from another place, but you and your father's family will perish. And who knows but that you have come to your royal position for such a time as this?" (Esther 4:13-14, NIV)

Esther urged all of the Jews to fast and pray for deliverance. Then risking her own life, brave young Esther approached the king with a plan of her own.

She invited Xerxes and Haman to a banquet where eventually she revealed her Jewish heritage to the king, as well as Haman's diabolical plot to have her and her people killed. In a rage, the king ordered Haman to be hung on the gallows--the very same gallows Haman had built for Mordecai. (Some translations read "impaled on a pole" rather than "hung on the gallows." In ancient Persia the precursor to Roman crucifixion was done by impaling the body and hanging it on a wooden pole or stake.)

Mordecai was promoted to Haman's high position and Jews were granted protection throughout the land. As the people celebrated God's tremendous deliverance, the joyous festival of Purim was instituted.

Author of the Book of Esther:

The author of Esther is unknown. Some scholars have suggested Mordecai (see Esther 9:20-22 and Esther 9:29-31 ). Others have proposed Ezra or possibly Nehemiah because the books share similar literary styles.

The book of Esther was most likely written between B.C. 460 and 331, after the reign of Xerxes I but prior to Alexander the Great 's rise to power.

The book of Esther was written to the Jewish people to record the origins of the Feast of Lots, or Purim. This annual festival commemorates God's salvation of the Jewish people, similar to their deliverance from slavery in Egypt.

The name Purim, or "lots," was likely given in a sense of irony, because Haman, the enemy of the Jews, had plotted to completely destroy them by casting the lot (Esther 9:24).

Landscape of the Book of Esther:

The story takes place during the reign of King Xerxes I of Persia, primarily in the king's palace in Susa, the capital of the Persian Empire.

By this time (486-465 B.C.), more than 100 years after the Babylonian captivity under Nebuchadnezzar, and just over 50 years after Zerubbabel led the first group of exiles back to Jerusalem, many Jews still remained in Persia. They were part of the diaspora, or "scattering" of exiles among the nations. Although they were free to return to Jerusalem by decree of Cyrus, many had probably become established and did not wish to risk the dangerous journey back to their homeland. Esther's family were among the Jews who stayed behind in Persia.

Themes in the Book of Esther:

There are many themes in the book of Esther. We clearly see God's interaction with man's will, his hatred of racial prejudice, his power to give wisdom and help in times of danger. But there are two overriding themes:

God's Sovereignty - The hand of God is at work in the lives of his people. He used the circumstances in Esther's life, as he uses the decisions and actions of all humans to providentially work out his divine plans and purposes. We can trust in the Lord's sovereign care over every aspect of our lives.

God's Deliverance - The Lord raised up Esther, as he raised up Moses, Joshua, Joseph, and many others to deliver his people from destruction. Through Jesus Christ we are delivered from death and hell. God is able to save his children.

Key Characters in the Book of Esther:

"For if you keep silent at this time, relief and deliverance will rise for the Jews from another place, but you and your father's house will perish. And who knows whether you have not come to the kingdom for such a time as this?" (ESV)

"Go, gather all the Jews to be found in Susa, and hold a fast on my behalf, and do not eat or drink for three days, night or day. I and my young women will also fast as you do. Then I will go to the king, though it is against the law, and if I perish, I perish." (ESV)

Mordecai recorded these events, and he sent letters to all the Jews throughout the provinces of King Xerxes, near and far, to have them celebrate annually the fourteenth and fifteenth days of the month of Adar as the time when the Jews got relief from their enemies, and as the month when their sorrow was turned into joy and their mourning into a day of celebration.  (NIV)

These days should be remembered and observed in every generation by every family, and in every province and in every city. And these days of Purim should never fail to be celebrated by the Jews—nor should the memory of these days die out among their descendants. (NIV)

Outline of the Book of Esther:

The Book of Esther will be positioned in 2015. It's about the strugle of women everywhere to take their place and resposibilities in the now and in the future. It's about finding a forgotten dream and then holding on to that dream. And achieve that without pushing the man aside...so by her own strength.

Listen to Queen of the Party Demo

Listen to My Way Demo

Listen to This Summer Love Demo